General Care for your Great Dane

When you rehome a Great Dane of any age, the following advice will help you to settle the dog into their new abode with consideration.

If you buy a Great Dane puppy from a breeder it should have in its ‘suitcase’... 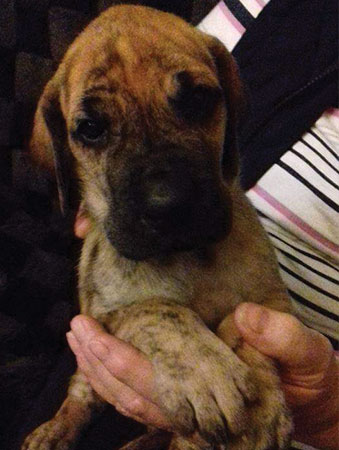 The trade secrets of looking after a Great Dane.

It is an offence to break into someone else’s vehicle!
However, this dog must be extricated and instantly immersed in a cold tub of water, hosed down, or wrapped in a cold wet towel. Cooled down in a river or stream, but be careful of a strong current, the dog could be dragged away, also the very cold water could cause shock to the dog’s system.

I MUST REPEAT!
IT IS AN OFFENCE TO BREAK INTO SOMEONE ELSE’S PROPERTY, OR VEHICLE!

Many a saga has been written about the eating habits of Great Danes. Suffice to say a good daily routine is your best policy. Make it and stick to it! 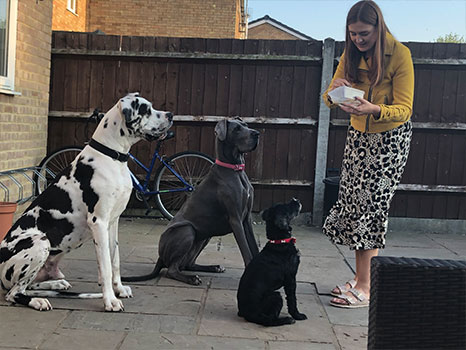 If you wish to ask our advice

Please Get in touch 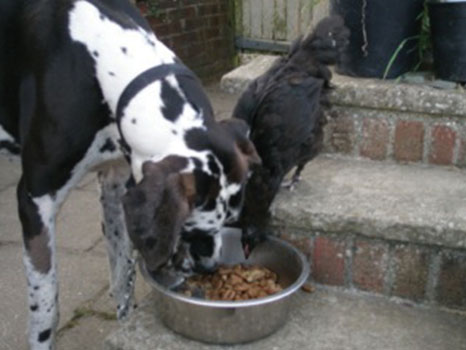 There is nothing worse than a poor feeder, nothing more calculated to send the sanest of dog lovers round the twist.

It is frustrating and worrying not to mention wasteful. The tale of ‘The Problem Feeder’ is well told, and most breeders have heard it a hundred times, even if you have not had it poured down the phone to you before, I am sure it will ring a few bells!

By kind permission of Elaine Hyde.

The puppy is quite normal, a happy bouncing little soul that eats quite well during the first weeks (after the initial new home blues), then at around 16 weeks usually when he is cutting the first teeth, he goes off his food, doesn’t want his milk and thinks his usual diet is YUK! The owners are worried, (after all this is going to be a Great Dane). “If he doesn’t eat enough, he won’t grow”, and so they change his food to their idea of a more tempting dish. “Perhaps he didn’t like the old stuff; I wouldn’t like to eat the same old thing every day”.

Now for a day or two the new food is wonderful, and he eats it as if there is no tomorrow, then he turns his nose up at it. Menu number 2 hits the dust and something else must be tried. “It worked last time; he must be a canine gourmet”. Menu 3, however, only lasts one feed and Menu 4 is hardly even sniffed at. By now almost every waking moment is taken up with the poor dog’s dietary intake and feeding times are a nightmare of “will he/won’t he”. 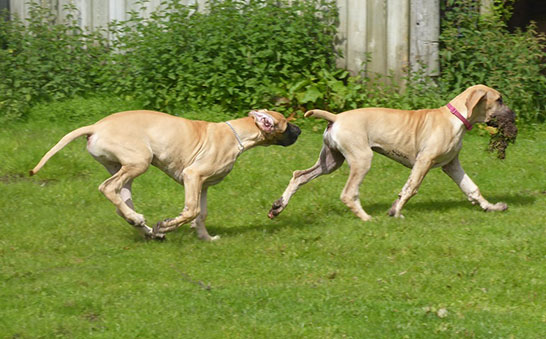 They sprinkle cheese, gravy, suet etc over the bowl, hand feed him, scatter it on the floor because sometimes “he cleans up the mess”. But nothing pleases him and all the time he seems to get thinner.

It can be solved but it would have been easier not to have got there in the first place. Remember, dogs are just like us, sometimes they are starving hungry and other times they are just not interested.

Nothing you do will make a dog with a small appetite turn into a mobile dustbin!

Perhaps when they are teething, when it is very hot, bitches when they are 5 or 6 weeks after a season, dogs, when the bitch down the road is more ‘interesting’ than usual. Also, some are greedier than others by nature, and some are genetically designed not to be roly-poly fat during their growing period or young adulthood. Nothing you do will make a dog with a small appetite turn into a mobile dustbin! 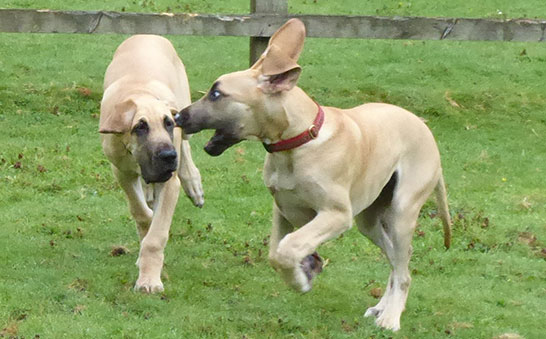 He may have periods of ‘off’ days all through his growing period or longer, and these are the times that if you ‘tempt’ and ‘push’ him to eat more than he wants, you create a mental feeding block that starts by being fussy and ends up baulking at any food whatsoever. You can, in fact, so worry a young dog that the sight of a feeding bowl is enough to make him tremble.

It is interesting, and no surprise, to note that 9 out of 10 problem feeders are owned by people who want to show their dog; and here lies the clue. The more important it is for the dog to look right (i.e. show ring sleek), the more likely they are to be worried when the dog is finicky and slowly develops a problem as described above.

Find out what the dog’s parents were like when they were young. If the Sire (now a beautiful rounded show dog) was a skinny tin-ribs type when he was a teenager, you may be bashing your head against a brick wall to get weight on to his tin-ribs son/daughter. Do not worry about him he will get there in the end. Whatever you might think he won’t starve himself to death.

Now on to the dog who is already a problem feeder

Perhaps there are other ‘answers’ but this is the one I know that does work, I have used it myself and advised others too and if you really want to, you can solve the problem.

To start with you must be feeding a well-balanced and palatable food; even hungry dogs will not eat sour or stale food that has been hanging around for days (in and out of the fridge). If you do not have another dog that is a gannet you must be prepared to throw food away sometimes. 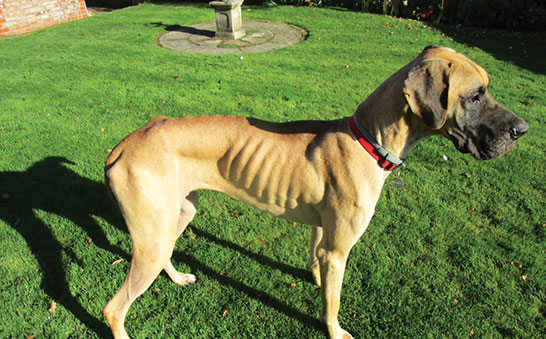 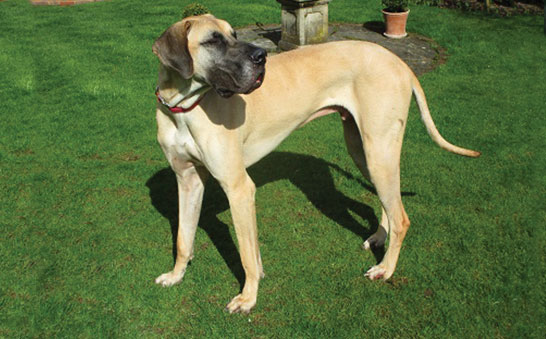 Years ago, I was showing a promising young puppy who I always felt should be a bit fatter! She never had a big appetite and I simply couldn’t bear seeing her thin or missing meals so I did all the things I have mentioned in the 2nd paragraph of this article, and ended up not just hand feeding her but force feeding her!

Yes, I am not a bit proud of it, it was dreadful, and I was in tears over her many times. This went on until she got her Championship at about 2½ years old (a long time to stuff food down a dog). I told her on the way back from the show that she needn’t eat now, it didn’t matter if she looked like a hat-rack she need never go to a show again (it just shows you how up-tight I was about her).

Anyway, that night and from then on, she was given the ‘five minutes and no more’ treatment. It worked like magic. No, of course she did not turn into a gannet overnight, but she ate her meals at the proper times with no coaxing. She seemed to know that there was no tension anymore; she even got to the stage where I had to diet her to reduce her waistline. She is an old retired lady now, but I will never forget the lesson I learned, and I would never do it again.

Problem feeders are made not born. The more you worry the worse they get. If you have never known the frustration of a poor feeder you are very lucky indeed.

General advice about exercising your Great Dane, from ‘toddler’ to ‘senior citizen’.

Some will have such peculiar quirks, that you’re left wondering whether in AREA 51 more than the odd alien, or two, landed to scare the human race!

If you take the time to watch their ‘body language’, for instance; if they begin to shake or growl at a certain noise, try and work out why that should cause them such worry. Reassure them that they are safe and there is no need to be afraid.

We have many, many years of experience with Great Danes who have had all sorts of problems, we would be incredibly happy to help you; and if we can’t we’ll know someone who can.

We would love to be able to help 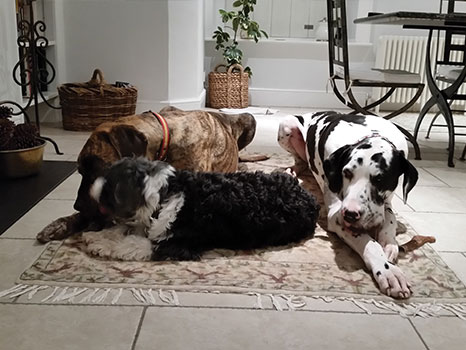 The following questions are to be found on the Police Website www.askthe.police.uk.
It is advisable to go online and read the full answers, so that you are quite clear on the law regarding dogs.

Here is a sample of FAQ's

Q21:   There is a dog in a vehicle that appears hot and distressed, what should I do?

ANSWER: It is not advisable to force entry to the vehicle yourself.  Your first step should be to call the RSPCA on 0300 1234 999 to inform them of the details namely, the condition of the dog, the registration number and location of the vehicle.

Q23:   My pet has been attacked by a dog can the Police do anything?

ANSWER: It depends on the circumstance but there have been decisions in the past by courts and authorities to suggest that it is the nature of a dog to kill and wound small animals.

ANSWER: Most dogs do return of their own free will…

NOTE: The police no longer have responsibility for stray dogs.

ANSWER: Some animals do not come within the definition of animal within the Road Traffic Act 1988…

Q524: What happens if my pet dog bites an intruder in my house?

ANSWER:  This will depend on the exact circumstances of the incident.  The following should be used as a guide only for scenarios as each case will be considered individually.

ANSWER:  Yes, the law states that every dog whilst on a highway or in a public place must wear a collar with the name of the owner on it.

Is an internet based dog registration scheme which actively helps you locate your dog.

Camrosa Ointment stops itching, soothes the skin, promotes the natural healing of open wounds and sores, and encourages hair to grow back once the skin has healed. 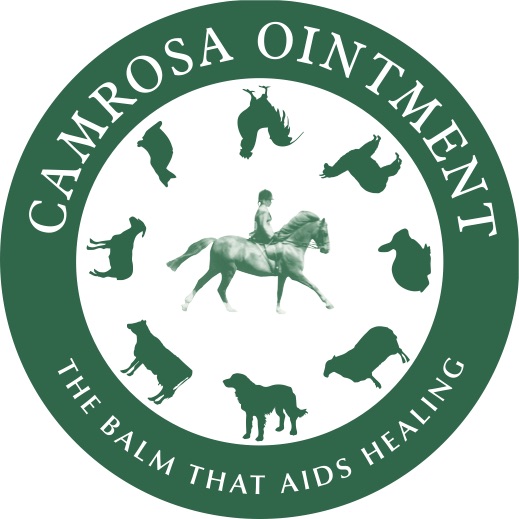 Verm-X works to create an environment in the gut and digestive system that is able to eradicate and expel intestinal challenges. Unlike some pharmaceutical products that act with a purging effect, Verm-X is very gentle.

PETPlus is a whole food supplement which promotes and maintains whole body health.

Dog Lost is an internet based dog registration scheme which actively helps you locate your dog.

Provides free veterinary services for the pets of needy owners in the UK.